The Byzantine Monasteries Of Meteora 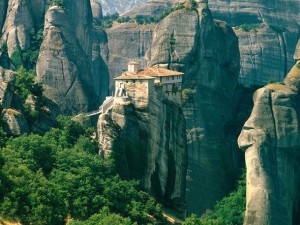 The monastery was founded in 1545 by the brothers Joasaph and Maximos of Ioannina on the site of an earlier church. In 1614, the monastery became an auxiliary of Varlaam Monastery.

For two centuries before World War II, Roussanou Monastery was in disrepair. In 1940, during the German occupation, the monastery was plundered by the Germans. Following the war, the monastery was repaired by an archaeological service and, since 1988, it has been occupied by a community of nuns. Today, entry to the monastery is over a small bridge from another pinnacle.

The monastery consists of a three story building on top of a towering pinnacle. The Church of the Transfiguration of Christ occupies the ground level along with nuns’ cells. The second and third levels are occupied, in addition to more cells, by quest quarters, receptions halls, and an exhibition room.

The frescos in the church date from 1560 and are smaller versions of those in Varlaam Monastery.

The Great Meteoron Monastery, also Megalo Meteoro and Metamophosis, is the main 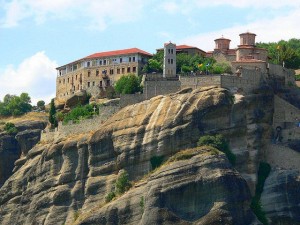 monastery in the Meteora complex in Greece. The community is also known as Monastery of the Transfiguration. It was founded by the monk Athanasius Koinovitis in the mid-fourteenth century.

Athanasius began the monastic community on the Platys Lithos, or Broad Rock, a few years after his arrival in the Meteora, which was the highest pinnacle. In 1356, the Serbian Emperor Symeon Uros endowed the community with funds to build the Katholikon of the Transfiguration and expanded the monastery. The katholikon has a twelve-sided dome that is 78 feet (24 meters) in height and a series of frescos that depict persecution of Christians by the Romans. The frescos were done by Theophanis.

About 1373, John Uros, the son of Symeon Uros, retired to the Grand Meteoron as the monk Ioasaph. He succeeded Athanasius on his death in 1383 and continued the expansion of monastery and the church until his death in 1422. 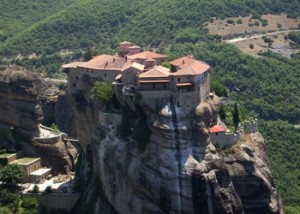 The Varlaam Monastery or Barlaam Monastery in Meteora is one of four active male monasteries in the Meteora monastery complex in Greece. It is the second largest monastery in the monastic community.The monastery was founded in 1517 by Theophanis and Nektarios Apsaradas on the site of an earlier monastery that was established by an ascetic anchorite named Varlaam. In 1350, Varlaam climbed to the top of the pinnacle where he established a cell for himself and build three small chapels and a water tank. After his death the site was abandoned as he was a solitary.

The hieromonks Theophanis and Nektarios Apsaradas, who were from ioanina, re-occupied the monastery site two hundred years later. They renovated Varlaam’s small chapel, the Parekklesion of the Three dedicated to the Three Bishops (St. Basil the Great, St. Gregory the Theologian, and St. John Chrysostom). Additional renovation was done in 1627 and frescos were painted in 1637. Over a period of twenty-two years using a tower and a rope and pulley system with a basket they hoisted the materials needed for construction of their monastery. After all the materials were in place, they built the main monastery church, the katholikon dedicated to All Saints, in twenty days. The monastery was occupied continuously throughout the sixteenth century and into the seventeenth after which it began to decline. It was only in early nineteenth that steps were first cut in the rock to get the top of the pinnacle.

The katholikon is of the Athonite style of a cross-in-square topped with a dome in each section and was built in 1541/1542. The tower with its old windlass and basket, that dates from 1536, has been used as recently as 1961 to 1963 to support renovations when the refectory was modified as the museum.

In 1548, the frescos in the main church were painted by the iconographer Frangos Katelanos of Thebes. The frescos in the narthex were painted in 1566 by George and Frangos, brothers from Thebes. The monastery also possesses a collection of artifacts including relics, carved wooden crosses, icons, embroidered epitaphia‎, and other ecclesiastical items. These are displayed in the monastery museum.

The monastery also possesses over 300 manuscripts. 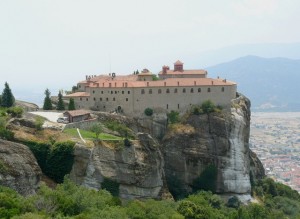 St Stephen Monastery was founded around 1400 by St. Antoninus Cantacuzene. The original church of the monastery, dedicated to St Stefanos, was built in the sixteenth century. The church has a timbered roof and is decorated with wall paintings done in 1545 by the priest Ioannis from Stagoi. The katholikon, which is dedicated to St Haralambos, was built in 1798 and holds the skull of the saint that was given to the nuns by Prince Vladislav of Wallachia. The monastery was built on the plain of Meteora and not on a pinnacle as are the others. As a consequence of the easier access it was damaged and abandoned during World War II. In the Greek Civil War that followed World War II, the monastery was further desecrated during which many of the frescos were destroyed by communist rebels. In 1961, a number of nuns took possession of the monastery facilities and began restoring it. Among the surviving frescos is one of the Virgin in the apse of the fifteenth century refectory. Restoration work in the katholikon includes painting new frescos by modern artists.

Holy Trinity Monastery or Agia Triada Monatery at Meteora, Greece, was founded in 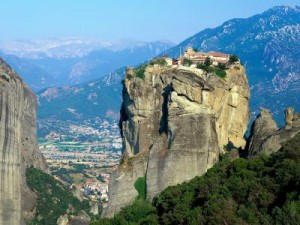 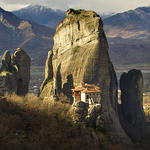 The St Nicholas Anapafsas Monastery, also Agio Nikolaos Anapafsas, is a male monastery and is one the six active monasteries in Meteora, Greece. The monastery was built in the sixteenth century by Dionsious, the Metropolitan of Larissa.  The Katholikon in the monastery was painted by the Cretan iconographer Theophanis Bathas-Strelitzas.“